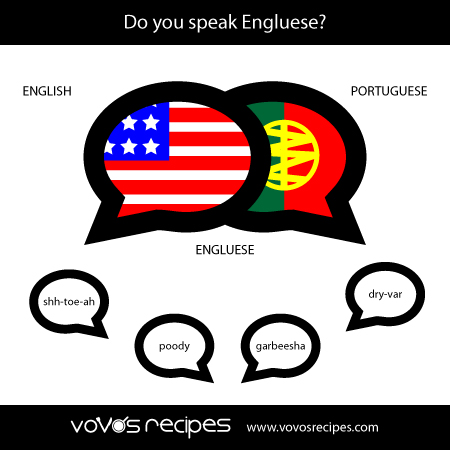 Growing up with grandparents that didn’t speak English, I always tried my best to teach them English words. Have you ever heard a Portuguese person try to speak English? You can hear that strong accent of theirs when trying to pronounce an English word. And many times, words became a bit twisted and ended up sounding Portuguese. I became accustomed to both hearing and using these words that I thought were Portuguese.

It only took a trip to the old country to realize that what I had been speaking all along was wrong! A perfect example of this was when I was hanging out with my cousins. We were trying to decide what to do that day and a suggestion was made to go shopping. So I said “let’s go to the store” in Portuguese but I pronounced the word store as “shh-toe-ah”.

Wow did I get some weird looks! So I repeated it a couple more times and still got clueless faces. Hmm, maybe I should describe what a store has? So I said “you know the place that sells clothes” in Portuguese and everybody started laughing at me. But what was so funny?

Much to my surprise, the word for store that I’ve been using all along, the same word my grandparents used, wasn’t even a real word. It wasn’t even Portuguese. It was an English word that sounded Portuguese!

You can imagine how scared I was to speak another word of Portuguese to anyone ever again!

Here is a list of other words that I’ve heard being used in Portuguese families:

Do you have any Engluese words that you can add to this list? Feel free to share in the comments!