Who doesn’t love walking into someone’s house and immediately catching a taste of what’s cooking or baking in the air? The kind of smells that make your mouth water and your stomach growl, wishing and waiting for the chance to take a bite. Yeah sorry, I’m not talking about those!

What I would like to talk about is how a teenager, who was out with friends for a nice dinner, ends up becoming the stink of the party. It all started back when this teenager’s father decided to cook Dobrada very early in the day. For those that do not know what Dobrada is, it’s Portuguese for Tripe, which is cow’s stomach, and is usually made in a stew with potatoes, beans, and more. It also takes a long time to cook, hence the reason for starting so early. 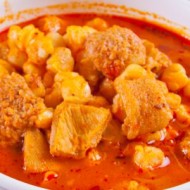 I was barely awake yet and I already knew that my dad was cooking it. It’s a very unique smell, not one that makes you sick to your stomach, but difficult to describe, and it already reached my bedroom. Great, so for the rest of the day the house was going to smell like tripe. As it got closer to me leaving to meet up with my friends, I started to get ready. I took a shower, washed my hair, shaved, put on some nice clean clothes, splashed some cologne on and was good to go.

You’d think that doing all that would remove the stench. Nope. That smell just lingers throughout the house, especially on your clothes. So I arrived at the restaurant, sat with my friends and began to converse. Not long after, that’s when it hit them. “What’s that smell?”, my friends asked. You know that rush of heat that runs through you and that bright red color of red that you turn when you immediately feel embarrassed? Yup, just happened. “Sorry, that smell would be me”, I said with a slight smirk on my face. They laughed, which was a relief, as I continued to tell them why I smelled like I did.

Of course when I got home, I immediately told my father that he could no longer cook tripe in the house. A teenager’s reputation was at stake you know! Thankfully, from that moment on, he would use the side burner on the grill outside. Surprisingly, the neighbors still like us!